What it Takes to Succeed in the Martial Arts 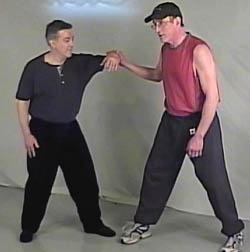 On Saturday, Alex drove three hours from Milwaukee for a private lesson. We worked in my basement for three hours and then he drove home. A 9-hour day for Alex, and these private lessons are not cheap. In the photo at left, I'm working with him on establishing and maintaining the ground connection--step one in learning the internal arts. We went through several of these exercises, plus peng jin, silk-reeling and whole-body movement. It was a lot of fun and I could tell he learned a lot.

I admire someone who does this. Alex has been a member of the online school, and he had the Internal Strength DVD, but he wanted to understand it better so he spent a day traveling to my home for some hands-on training and correction.

This is what it takes to succeed, and I admire someone who goes to that kind of time and effort.

It isn't easy finding good teachers to study Tai Chi with, and that's why--in 1998--I began making a 4-hour round trip to study on a regular basis (sometimes twice a week) with Jim and Angela Criscimagna. They lived in Rockford, Illinois at the time (now they live 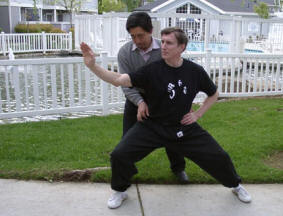 near San Diego and are disciples of Chen Xiaowang). They sponsored workshops with Chen Xiaowang and Ren Guangyi, and I was there at every opportunity.

I later had another teacher, and traveled to California to study. I also hosted seminars with my teacher, flying him here and losing a thousand dollars a pop just to experience the training. I once flew to California to study privately for a day with Grandmaster Chen Xiaoxing (photo at right), and later I sponsored his visa so he could come to the U.S. the following year for a seminar tour. That's when he visited my home for a week.

I sat on the plane after the day in California with Chen Xiaoxing, flying back to the Quad Cities, writing furiously in my notebook -- notes on every movement of Laojia Yilu I had been through and the advice I had received. I still have those notes, and I work on them and practice the concepts with my students, both locally and online.

I did the same after flying to Washington, D.C. for a weekend workshop with Chen Xiaowang, hosted by C.P. Ong. Or driving to Chicago for a day of push hands with Chen Bing.

When you hear people complain that a class fee is too much, or the school is way across town, or they don't want to commit to $19.99 a month online, it sort of separates the people who like to "think" about being a martial artist and those who are serious. When you're serious, you'll practically crawl through glass to get the training you need to take just one more step forward.

It wasn't always easy going to Rockford. I worked in Iowa City at the time, so if I went up on a weeknight, I'd leave work around 4:00 and drive 3 hours to get to class. But after class, I would be bouncing around in the car all the way home, my mind buzzing with the movements and the concepts Jim and Angela were teaching. And the drive home always went pretty fast.

Each time I made these trips, I knew that what I was learning was going to take more time to develop -- years. When you first learn internal arts concepts, you might understand them intellectually, but it takes a LONG time to reflect them physically. But I was willing--like Alex--to invest the time and the money to take just one more baby step--to understand just one more concept a little more--even though it might be a few years before I could do it right.

The name of the internal arts game--whether it's tai chi, hsing-i or bagua--is time and practice and hard work. That's why they call it kung-fu. The next photo on the left is the group that participated when Jim and Angela (front row standing 2nd and 3rd from left) held a workshop at my school back in 2001. Again, I lost money, but that wasn't the point, was it? When you receive good training, what's it worth in the long run? As they say in the TV commercials -- priceless. 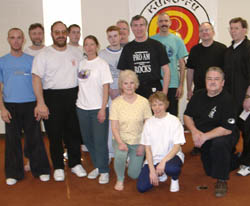 Just like Jim and Angela did for me, I allowed Alex to videotape the entire private lesson on Saturday. That way, he won't have to worry about retaining everything in his memory. You can only retain 10 or 15% anyway, if that, unless you have a LOT of notes. Most lessons are so full of advice and tips that there's no way you can reconstruct it all from memory, so the video will help as he works on it in Milwaukee.

He says he'll be back in 2 or 3 weeks. I think this young man has a future in the internal arts. :)

What are you willing to do to learn--to improve your skill--to find out where you need to work harder? The answer you provide yourself is the key to your long-range future as someone who likes the idea of being a martial artist and one who becomes a martial artist--one difficult step at a time.

To think, I used to complain about the 2.5 hour round-trip to train with my Wing Chun sifu in Tarpon Springs. You and Alex make me feel like such a wus!

Actually, this post tells about what a great time we live in. We can meet and train with masters throughout the country and throughout the world thanks to modern transportation. We also have books, videos and DVD's to help further preserve and share that knowledge.

Great article. I think a lot of people will really be able to connect with it in some way; change the names & cities and it nearly reflects some of my own happenings. After a few years of Hun Gar Kung Fu with Sifu Bill Smith in SLC, UT I craved for more internal depth. Working for Delta Airlines afforded me to be able to begin training under Dr. Yang, Jwing-Ming in Boston a few times per year. In 2001 I was the second person he certified to teach Chinese QiGong under him. In 2003 I hosted a seminar with him in AZ(taking a loss as well)that people from several states came to attend. Afterwards I was fortunate enough to take him to one of the wonders of the world that I'd remembered he wanted to see: The Grand Canyon. We were fortunate to have a guide there as a fellow student so we got to hike down, BBQ, and stay the night in a cabin at the base and hike out the next day. Now he is living his dream of cultivating the deepest aspects at his own private retreat in the Redwoods of California.

I've had some great experiences with all the people that convene at YMAA: Rami, Jim Noble, Cieran Harris, Joshua Sedam... In the end, its the people that make it all worth it and the connections shared through the training that uplifts your life to a surprising degree. Every effort you put into this pursuit will be redoubled back to you in ways you may have never thought.

p.s. feel free, whomever would like, to let me know if my reviews are of any help here: http://www.amazon.com/gp/cdp/member-reviews/A39O54KS2V7Q7U/ref=ya__26?ie=UTF8&sort_by=MostRecentReview

I was really surprised to learn you lost money on the seminar(s) Angie and I did for your school. I thought you had enough students (12 in the picture) to at least break even knowing what you charged). It is distressing to hear you lost money and if we had known that, we would have charged you less so you wouldn't have lost any money.

We lost money on almost every seminar we hosted for 18 years, until we began hosting CXW. (On one Zhang seminar we lost over $1000.)

With hosting CXW we never lost money, since he got all the money after our expenses (which were around $600 total). He never made less than $10,000 a visit and one year made over $13,000 for a 2 1/2 day seminar, with a few privates, selling videotapes, and his calligraphy.

Wish I could make that kind of money teaching Taiji, but I am not CXW. ;^)

Anyway, again, sorry to hear you lost money and wish you had told us so we could have reduced our fee to help you break even (at the very least).

Jim,
Oh hell, your workshop was the best and the least expensive to host -- and I came closest to breaking even with it, too. Very close. I should have clarified that. It was well worth it and I'd do it again in a heartbeat.

I learned a lot for several years about having high overhead. It isn't worth it. That's why right now, we're meeting in a park for practice sessions with core students here in the Quad Cities. I had enough of high rent, utilities, insurance, etc.

I would recommend anyone who is interested in hosting a workshop to host folks like you and Angela (and now that I'm doing them, me) because, as I saw with the workshop I did last Saturday, you can really get a lot of important concepts across to people when there isn't a language barrier. With some traditional masters, there is also a cultural barrier, and they only want to give a little bit of information. We tend to give what the audience needs at the time.