How to Develop Internal Arts Skill - The Ground Path

I can't tell you how many internal artists I've met during the last decade or so who look at me with blank stares when I ask if they have been taught about the ground path.

I kno w how they feel. I first heard about it around 1997, when I started reading a network listserve, where Mike Sigman and others talked about it. I had studied martial arts for many years at that point, and had practiced the internal arts for a decade, and this concept was new to me.

I began studying Sigman's material and attended a workshop he held in Minneapolis. I began studying Chen tai chi with Jim and Angela Criscimagna, and learned body mechanics that were foreign to me. As I've seen during the past decade, these physical skills are still foreign to a lot of internal artists. Simply put, there is a LOT of bad instruction happening in the internal arts, particularly tai chi.

When Sigman began telling tai chi teachers and students about the ground path, he was flamed by many of them because they had developed a false image of their own skill and didn't want to hear any information that conflicted with their self-delusion. It's just like politics -- we've trained ourselves to reject any information that doesn't support the opinions we've developed.

Fortunately, I don't have that trait. I look for new information and, if it helps me improve, I embrace it, even if it means I have to tell myself I've been traveling down the wrong path and need to discard much of what I've invested time, money, and emotion in.

On my online school, I'm offering a free 10-part course in some basic internal arts skills, and how they are used in tai chi, hsing-i and bagua. You can also sign up for it here on this post (scroll down). In the first video lesson, I show two or three basic exercises to help you begin to develop ground strength. There are many more in the online school and on the Internal Strength DVD. 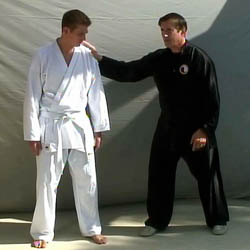 Using the strength of the ground requires the correct body structure. In doing so, you connect this strength throughout the body, and when you combine this strength with other internal body mechanics, you're able to transmit incredible power in a relaxed way. When someone pushes on you, it's as if they feel an iron bar running to the ground. You've probably seen video of tai chi people putting out their arm and letting a line of people push on it, but they can't knock him down? It's simply a matter of using ground strength.

In the photo at left, I'm pushing on Tom Revie's left shoulder. He's standing with his feet about shoulder-width apart and he's feeling the push going into the ground through his right foot. This is the first exercise in learning to establish the ground path. One common mistake would take place if Tom pushed back at me. His job is to relax, take the push, and connect it with the ground.


It's difficult -- if not impossible -- to learn these skills by reading about them. As they say, "It Has To Be Shown." 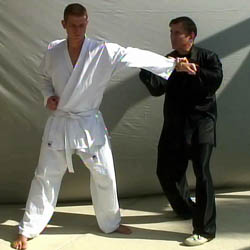 If you aren't using these two skills together in every movement, you aren't doing tai chi, or hsing-i, or bagua. You're just pretending. And if you haven't been taught these skills, your teacher has let you down. Sad but true, but at this point, it really can't be denied. Ten or twenty years ago, Americans didn't know this information. Now we do. Every "energy" in the internal arts (roll-back. press, push, split, etc.) depends upon the ground and peng.

In the second photo, I'm using the ground from my right leg, connected to my right hand, to break Tom's elbow (well, okay, I didn't really break it).

The free video course demonstrates the ground path, peng jin, whole-body movement, silk-reeling energy, dan t'ien rotation, using the kua, and how all of these skills are combined in the practice of the internal arts.