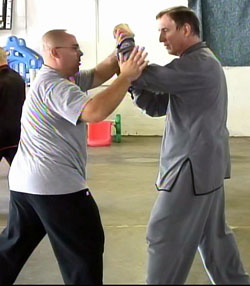 "Jin" means "energy," although that has been misinterpreted by some literal-minded folks who believe it is an actual scientifically real "energy" in the body. It has also been called "power" by some.

I tend to think of jin as "skill." The term "energy" is an abstract way of describing the skill that you develop with practice. Liu jin, for example, is "roll back" energy. It's a physical skill that combines reflexes and sensitivity when someone pushes or punches or attacks in another way. The skilled fighter who uses liu can deflect the attack, rolling it away and often causing the attacker to go off-balance. Naturally, this takes a lot of practice. It's impossible to develop this skill just by doing a form.

The most important of all the so-called "energies" of tai chi and the internal arts is peng jin. It MUST be present in all of your movements, even when you walk. If it isn't, you're not doing tai chi (or hsing-i or bagua). Peng jin is present in all the other energies of the internal arts -- without it, you couldn't perform roll-back, press, push, split, etc.

Peng jin permeates the entire body. Often, you'll see a beginning student moving one arm with peng, but losing it in the other arm, if they think that the other arm isn't in an "attacking" position. Then again, you can walk up to a lot of tai chi students as they're performing, and push on their arms as they are moving, and their arms will collapse because there is no expansive force of peng behind their movements.

The tai chi folks who call this a "soft art" are often guilty of teaching tai chi so soft and wimpy that their students crumble and collapse under any incoming force.

Now, to set the record straight, peng jin isn't intended to be a resisting force. It's an expansive force, but it doesn't resist. When you press into someone who is using peng, they're often using silk-reeling energy, too (or they should be) and they will roll you off, neutralizing the incoming force. When you apply force into peng, you don't necessarily feel the peng until the hammer comes down.

Some even compare peng jin with the force at the top of a puddle of water. If a leaf falls onto the puddle, it's held at the top by a force. I prefer to think of peng as the same energy you feel when you push a beach ball into the ocean or a swimming pool. But if you punch that beach ball while it's in the water, the ball doesn't resist, it spins, leading your punch into emptiness.

In the internal arts, at least the way I teach them, the first skills you learn are to establish the ground path and to use peng jin along with the ground. The two MUST work together at all times. If your teacher hasn't talked about these concepts, you need to find another teacher. That may sound rude to some, but it's true. Let me repeat -- you are NOT doing internal arts if you aren't putting the ground strength and peng jin into every movement.

I've told this story before, but I studied for a long time before hearing about these concepts. When I began studying with Jim and Angela Criscimagna, I was practicing Laojia Yilu with a group of students in a park. I began the movement "Six Sealings Four Closings" when both hands go out to the right before sweeping down and to the left. From fifty feet away, Jim shouted, "Ken, you just lost it." I asked what he meant. "You just lost your peng." I wondered at the time how he could see that from so far away, but now, as I teach, it's so easy to see when the ground, peng, and the intent are not in a student's movement.

This stuff isn't magic and it isn't mystical. Peng jin has nothing to do with some mysterious energy called "chi." It's a physical skill that requires a lot of practice, study, and work. After all, that's why they call it kung-fu.

In the free 10-part video course that I've put on the online internal arts school, I outline some of the basic skills you need for proper tai chi, hsing-i and bagua. You're invited to sign up here for this free course. You'll receive ten emails with links to videos, each of them up to 8 minutes long. You can also sign up below. It's absolutely free, and I would say that if your teacher isn't teaching you these skills,join the online school to supplement what you're studying or find another teacher.