What is Fa-Jing and How Do You Do It in Tai Chi, Hsing-I, and Bagua? 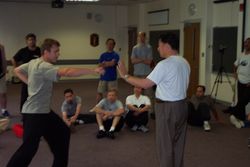 I'm often stunned by the literal-mindedness of some internal arts folks (that's no secret, is it?). The subject of fa-jing is one example of how a simple concept is misunderstood and misinterpreted.

Fa-jing means "issuing energy." Unfortunately, the people who desperately need to believe in the supernatural think that in doing fa-jing, you are shooting chi out of your hands or body. They take it literally.

It's not magical or mystical. It's a matter of physics.

In the internal arts, fa-jing -- issuing energy -- is more complex, but the end result is the same. You knock the hell out of something or someone.

Grandmaster Chen Xiaowang (shown in the photo above working with students on fa-jing at a workshop I attended in D.C.) says fa-jing is a matter of proper structure and internal movement. From there, he says you simply "step on the gas." He likes using automobile metaphors.

This week I shot a video lesson for the online school demonstrating the basics of fa-jing. This weekend, I'll shoot a second video on the "store and release" aspects of fa-jing, using a heavybag to help demonstrate.

Fa-jing is a matter of good posture and internal body mechanics. This means you must maintain ground strength, peng jin, whole-body movement, silk-reeling, dan t'ien rotation and opening/closing the kua. You must connect all of these skills through the body as you deliver the strike with speed, power, and relaxation.

It does take a long time to learn how to do this from an internal perspective, because we all bring bad habits to the internal arts and it takes years to learn the above-mentioned skills and learn to maintain the whole-body connection as you move.

When Grandmaster Chen worked with me on the punch, he told me to completely relax. He took one of my hands in each of his and he violently pulled on one and pushed on the other. I was as limp as a rag doll and my hands were punching out in an alternating way, with him "pulling the strings." It was his way of showing you the proper degree of relaxation your body should have during fa-jing. Then he coached me on closing the kua and moving into the punch, spiraling the movement through the body. The first few times I didn't have it. Then the lightbulb went on and I connected the power.

Nothing feels much better than getting a "good" from Chen Xiaowang. :)

Later, he did a fa-jing demonstration. With each strike, it seemed his uniform was exploding in all directions. It comes from being connected and relaxing -- and from a lifetime of practice. You can stand a few feet away from him and almost feel the energy when he does fa-jing. It reminded me of being on the floor right behind the basketball hoop during a University of Iowa game. When the big players were slamming into each other beneath the hoop, you could feel the body heat and almost feel the energy as they collided. I'll never forget it, and being close to Chen Xiaowang when he does fa-jing is very similar.

So put aside the myth of shooting energy out of your body. Focus on proper posture and mechanics and you'll be closer to developing the relaxed power of fa-jing.