Home Archives Profile Subscribe
How Long Does It Take To Become A Master of Kung-Fu? The Joy of the Journey
Martial Arts Phonies and Those Who Believe Them -- Part 1

I first met Shannon Lee, the daughter of Bruce Lee on two occasions at the Farmer's Market in Pacific Palisades, California where I help out every Sunday at a friend's dog adoption get together. Shannon walked through both times with her daughter. I introduced myself and told her how much her father had meant to my brother and me. Shannon was very friendly and gracious, and as we talked, I became aware of BLAM, the Bruce Lee Action Museum, a historic place she, her mother Linda Lee Cadwell (Bruce Lee's widow) and their Bruce Lee Foundation wanted to build in Seattle.
After talking with her and exploring the wonderful world of brucelee.com and joining their mailing list, I learned of the annual fundraiser that The Lee Family, through their Bruce Lee Foundation were going to have. All proceeds go toward the future Bruce Lee Action Museum.
My brother Ken (publisher of this blog) introduced me to Bruce Lee by taking his little brother to see Bruce's movies in 1973 when Ken was 20 and a martial arts student, and I was 8 years old. Ever since, I've been an admirer of the work, legacy, philosophy, honesty and passion of Bruce Lee as well as his children, the late Brandon and Shannon as they became actors and martial artists, both following in the footsteps of their father. I also hold Linda Lee in high regard as someone who tirelessly furthers the legacy and memory of her late husband Bruce Lee. When I learned of an intimate dinner to be held the weekend of February 8th where all monies would go to BLAM, I knew I had to be a part of it.
Landing in Seattle on Friday, February 8th, I only had minutes after arriving by train to my hotel (Hotel Seattle) to get to the private dinner held at O'Asian Restaurant in downtown Seattle. I arranged for my hotel to be in the center of downtown which made it incredibly convenient. I was a 5 minute walk away from the Restaurant as well as the next evening's Gala, held at the Sheraton Hotel.
Once in the restaurant, I was taken to a private dining room where Shannon and Linda and Kris, the COO of Bruce Lee Enterprises were mingling among the small group of guests. The capacity for this special dinner was only 20 on the invitation sent worldwide. Only 12 people ended up coming, some from as far away as Europe. 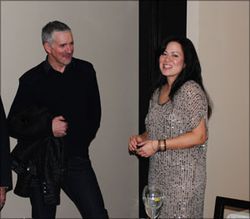 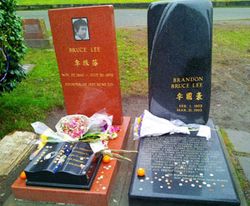 On Saturday, wearing the Bruce Lee - JKD hoodie, I ran a few miles through the city to the gravesite of Bruce and Brandon Lee. People came and went while I was there and flowers, coins and fruit adorned the ground and tombstones. It was a quiet, peaceful afternoon, a slight mist in the air.
Afterwards, I ran back to the hotel and got ready for the black tie event known as the 2013 Chinese Lunar New Years Gala organized by the Hong Kong Association of Washington Foundation. The entire evening was to benefit the Bruce Lee Action Museum. Proceeds from the ticket price as well as silent and public auctions held at the Gala all went to BLAM.
Arriving at the Sheraton Hotel where the Gala was held, I went in and had a wonderful evening of food, drink, socializing and Bruce Lee. At every turn in the huge lobby were many wall sized stand up posters with Bruce Lee pictures and quotes, original paintings depicting Bruce and various auction items.
The silent auction items included Bruce and non-Bruce items. The Bruce ones were everything from an 18 inch "Game of Death" action figure to work out gear to books, including the inaugural Bruce Lee book written by Shannon Lee, which is an exquisite book full of Bruce's history, including posters and rare memorabilia built into the book. Wonderful. It'll be available through www.brucelee.com in the very near future.
The Gala was a wonderful affair with many speakers, including the mayor of Seattle and Shannon Lee herself, who brought up her own daughter to join in, which was beyond adorable. Attending the event were political figures from all areas of government as well as many from American and Chinese corporations and organizations, both in Washington State and elsewhere. There were Chinese New Year dances and performances related to the ancient Chinese culture as well as a live auction where an auctioneer sold many items, with proceeds going to the Bruce Lee Action Museum. The food, wine and entertainment was top notch.
Also in the audience at the table with Linda and Shannon were Jim Kelly, John Saxon and Bob Wall, all of which I saw, but unfortunately didn't personally meet. Having gone to Bruce and Brandon's gravesite, I was late getting to the early pre-Gala part of the evening. It was there that I would've gotten to meet them. I did however get to talk more with Linda and Shannon at the Gala, going up to and hanging around their table. 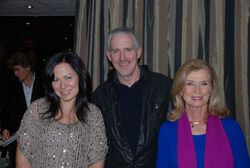 I thanked them both for everything and wished them the best. Linda remembered my name and I told her, "I would come to the breakfast tomorrow but I've got an 8am flight. I'll be in touch though and I'm sure we'll see each other again." Linda replied, "I'm sure we will." I hugged both Shannon and Linda and before leaving was introduced to and talked with Taky Kumura, who was Bruce Lee's student and first assistant instructor. He was gracious and completely down to earth. He also said that anytime I was in Seattle to come to his classes, free of charge, because I was "family" having been a part of the dinner and weekend. After talking more with Taky and meeting his son, the three of us posed for a picture together.
Around this time, the Gala was winding down. After a few more minutes, soaking in the surroundings, I said another goodbye to Shannon and Bruce Lee Enterprises COO Kris, giving him information about a Seattle artist friend of mine who is interested in doing a mash-up painting of Bruce and Brandon calling it "The Dragon and The Crow". He welcomed the idea. Saying goodbye, I left, returning to my hotel for an early morning flight. What a fantastic and unforgettable weekend this turned out to be.
Bruce Lee said some things that explain why I took this weekend journey to Seattle and to be a part of the Bruce Lee Foundation's efforts to raise money for the Bruce Lee Action Museum:
"You have to create your own luck. You have to be aware of the opportunities around you and take advantage of them."
"If you spend too much time thinking about a thing, you'll never get it done."
"Success means doing something sincerely and wholeheartedly."
"Be a practical dreamer backed by action."
"So, action! Action!"
And, there you have it. My weekend with the Lee family.
-- Submitted by Myles Gullette