Chen Huixian gives Ken Gullette hands-on corrections for "Single Whip."
It is a humbling experience, getting corrections on your taiji form by a member of the Chen family. This past weekend, I spent two days at a workshop in Madison, Wisconsin, where Chen Huixian -- a Direct In-Chamber Disciple of her uncle, Grandmaster Chen Zhenglei -- gave corrections on the Laojia Yilu form. Her husband, Michael Chritton -- a Certified Coach of the Chen Village Taiji Training Center of China -- helped provide feedback and corrections.

Everyone needs a coach to let them know when they need a tweak to get back on track. Training as I do here in the Quad Cities, without an official "teacher" since 2006, I need occasional hands-on corrections by someone at a higher level.

I got it this weekend.

Chen Huixian did not try to take us through the complete form. She asked what we wanted, and the group asked to spend more time on corrections and less time rushing through the choreography. Most of us know the form and some of us learned it through a different branch of the Chen family (I studied with teachers and disciples of Chen Xiaowang and Chen Xiaoxing) so we do some of the movements in a slightly different way. Not better, just different.

I was grateful every time she gave me feedback. Once, when I was overcompensating for some instruction on a movement to sink the hips, she demonstrated how my movement was exagerrated and said, "Don't do that!" The memory makes me laugh because that's the type of thing I would say to my students. Sometimes, when I am thinking about feedback, I drop my head as I contemplate the movement. Once when I did that, she loudly said, "Ken, the answer is not written on the floor!" Hilarious. And true. I'm going to use this.

Michael made a lot of good suggestions during the 12 hours of training. One little tweak there, one suggestion there, always given with courtesy and insight.

The main problem that follows a great workshop is retention.

After both days, I went through the movements of the day in my mind, scribbling down feedback on each movement as much as I could remember. It really helps down the road.

The workshop included a little stance-holding, trying to maintain a posture as Chen Huixian worked around the pavilion, one person at a time. That type of workout will test the leg strength of the most muscular person, and often, by the time she gets to you, the legs are shaking from fatigue. This is not your YMCA taiji where you aren't supposed to break a sweat. When you are put into the correct posture, Chen Huixian will ask, "Leg burning?" Yes, the leg is burning. She will smile and indicate that it is a good thing.

When done properly, taiji training is a grueling workout. The expression they use for the required pain is "eating bitter." The skill you get from eating bitter -- eventually -- is sweet. Or so they tell me. I've had a regular diet of bitter for 15 years. I'd like an order of sweet, please. Stat!!

The secret to making forward progress in the internal arts is taking one baby step at a time. That is impossible without occasional hands-on corrections from someone at a higher level. I love it, and as Nancy and I drove back home Sunday night from Madison, about three hours away, I was excited the entire drive home.

If you live in the Madison, Wisconsin area, I recommend Khiang Seow as an instructor. He hosted the workshop with Patrick Rogne. 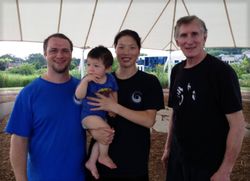 Michael Chritton, their son Xilong, Chen Huixian, and Ken Gullette.
And now, the hard work begins -- taking the notes and incorporating them into practice -- again and again! In November, I plan to attend the Chen Zhenglei workshop at Chen Huixian's school in Overland Park, Kansas, the largest suburb of the Kansas City metropolitan area. The goal is to improve one more baby step or two, and then get new corrections in November.

I will work on shortening my stances just a little, maintaining peng through both legs, and some other little things that I wrote down that include relaxation of the hips, spiraling, foot stability and more details about specific movements that I have not been taught before.

It is part of the lifelong journey that is taijiquan. And it's the knowledge that corrections help you get even better that make the journey so much fun.