A Bully Depends on Your Fear: The Most Effective Way to Deal with a Bully 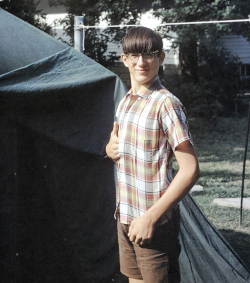 I didn't look very tough at 14, and that's why bullies targeted me, but I was rocking that Beatles haircut!!

He was 16 years old; taller, heavier and stronger.

And he wanted to beat me up.

I was 14, a skinny, friendly kid with glasses who was a magnet for bullies back in the days when boys settled arguments by fighting.

He was the son of the sheriff of Jessamine County, Kentucky, and he had a couple of young toadies who followed him around.

A couple of my cousins were with me, leaving the drugstore in downtown Wilmore where we had been drinking Cokes, looking at comics and lusting after Helen, the pretty girl who worked there.

Back in the 1950s and '60s, dogs and boys ran free through the streets and farms around Wilmore because, by God, that's how the good Lord made us. We walked on the train tracks, explored the graveyard, went swimming at local creeks, and even walked across High Bridge, a dangerous feat especially when trains were coming.

Our parents didn't care where we went as long as we went outside and left them alone. We were always ready to oblige.

"Kenny, Don't Ever Run from a Fight"

On this day, as we left the drugstore, the bully and his followers began taunting us, then challenged me to fight behind the drugstore.

I did not want to fight, but what could I do with my cousins watching?

The words of my dad rang in my head. "Kenny, don't ever run from a fight."

My dad was born in the 1920s and joined the Marines near the end of World War II. He was the nicest, friendliest man I ever knew, but he had a limit if he was mistreated. He would fight back.

As a kid, I took his advice to heart. I was not going to back down.

We went behind the storefronts where no adults could see us. The bully began circling me in the gravel and dirt as our friends cheered us on.

I was trying to figure out how to get out of this alive. Then he punched me in the face.

The Hard Punch of Reality

Fear gripped me. He is taller, heavier, and stronger, I was thinking. If I punch back, he will kill me.

He slapped at me and scratched my face. He got me into a head lock and I managed to escape. He kept hitting me and pushing me for what seemed to be half an hour. I could feel the scratches and welts on my face and head.

Eventually, I knew that I had to hit back. Either way, I might be whipped.

It is said that courage is not the absence of fear. Courage is doing what needs to be done despite your fear.

The bully stepped in and finally, I uncorked a punch to his face as hard as I could.

He stumbled backward, pain and surprise in his eyes.

"You hit me!" He held his face with one hand and unleashed a string of profanity that I hadn't heard since my dad hit himself on the thumb with a hammer.

Yes, I did hit you, I thought, and it felt really good. I advanced on him, but he backed away, covering up and wailing like he was scared to death.

He took off running with his toadies.

The Birth of a Legend

My younger cousins stared at me with a hero worship usually reserved for Superman or, in Wilmore, the mere mention of Jesus.

At that moment, I deserved that look. I had defeated the town bully, the sheriff's son, with one punch.

The legend spread through Wilmore. Kenny beat up the town bully. Gullette boys could hold their heads up with pride.

It was not my first fight with a bully, and it would not be my last. But as I look back on all those fights, I see a common thread.

A bully acts angry and tough to instill fear in his target. When he identifies someone who is afraid, he chooses that person as his target, thinking that the target will not fight back.

And the bully always has his friends behind him, weaker guys with their own personality issues who run away when the bully gets taken down.

I was always friendly, always ready to joke around, and bullies typically saw that as weakness. But there is one thing they did not understand.

I tried to avoid the fight as long as possible, but once I began fighting, I really loved it.

Nothing was more exciting than putting your own safety on the line against a bully.

Fighting another person is the ultimate macho one-on-one competition.

Even now, at 65, a cage fight is mesmerizing to me. I find MMA fights to be ugly and brutal, but I am drawn to them if I happen to see one on TV. It brings out something primal in me.

The last thing a bully wants is to fight someone like me.

When my daughters were in school, girls began getting mean. Only "trashy" girls fought when I was a kid. In middle school, a girl threatened my oldest daughter, Harmony.

Harmony took after me. She was very friendly and never met a stranger. But eventually, she stood up to bullies at least a couple of times and it worked.

Remove the Fear and Change Your Reaction

You see, the worst thing about dealing with a bully is the fear they instill in you. The only thing you have to fear about a bully is your own emotional reaction. If you react to a bully with fear, you give them exactly what they need. They thrive on it. They depend on it.

When you change the way you react and remove the fear, you take away the fuel that drives their actions.

Bullying gets more complicated as you get older. In relationships, bullying can take the form of emotional control or domestic abuse. Once again, the bully does not believe he or she will face a backlash from their targets.

At work, bullying can be more insidious, with verbal bullying, giving you impossible deadlines or tasks, and the invisible bullying that can happen when someone poisons your reputation behind your back.

In the workplace, bullies understand you can't hit them back.

I have seen them all. I cannot explain why they behave this way. A lack of self-esteem, abuse they endured as a child, or simply mental instability or internal demons they cannot control. It does not matter if you are the target.

In the workplace, bullies know they have economic power over you. If they sabotage you, it can be much more damaging than a punch to the face. It can be life-changing.

Here is a great article about dealing with bullies in the workplace.

Bullies love Facebook. If you write martial arts posts, or put video up showing techniques, bullies come out of the woodwork like roaches, belittling you from the safety of their keyboards. I have a one-strike-and-you're-out policy. One drive-by bullying comment and you are blocked forever. I will take away your control, remove the target, and lead you into emptiness.

How to handle bullies -- online and in the workplace -- would make a great podcast. I'm going to work on lining up an interview with an expert.

We study martial arts for a reason. We study so that we never have to use our skills, but if suddenly we find ourselves to be the target, or we see someone else become the target, we are ready to set aside fear and do the right thing.

Violence in school is taken much more seriously now than when I was growing up. But bullying has not stopped, and administrators still don't do enough to stop it and put the hammer down on the bullies. If my daughters were back in middle school, my advice would be the same if they ever feared for their physical safety. You may get in trouble at school for hitting back, but you will never get in trouble at home for defending yourself or someone else from a bully.

I never saw the sheriff's son again, but the story of our fight behind the drugstore echoed through Wilmore, Kentucky for years.

Tags: bullies depend on fear, bullies in workplace, effective way of dealing with bullies, fear and bully